If you’re reading other travel blogs or watching travel YouTubers to learn about the places you can or will visit with Global Grad, you will likely hear about one city a lot: Chiang Mai. There’s an allure about the place which attracts a lot of digital nomads to set up their base there.

How come? What should you expect to see in the first South East Asian study hub? I cannot go into depth, but here are a few things that may make you even more excited to visit the mountainous city.

Chiang Mai is the largest city in Northern Thailand. While the metropolitan area amounts to almost a million, the actual city is only around 130000. So, if you’re from a more rural area like myself, then you’re not jumping straight into a chaotic city like the Thai capital of Bangkok.

Chiang Mai is a central hub for many locations. From here, you can check out many a city, including Chiang Rai and Pai. In addition, if you’re feeling a little more adventurous, you can head out to Myanmar or Laos for a few days!

However, don’t spend too long away from the city, as you’ll miss out on the many amazing things Chiang Mai has to offer!

Chiang Mai is surrounded by mountains, so is a great place for someone who likes hiking. If you want to get some amazing views from the top, then you can also get a little red bus known as a songthaew. We did just that to see the amazing Doi Suthep!

We didn’t spend much time exploring the mountains in the 2019 semester but there are so many amazing sights. Doi Inthanon, Doi Chiang Dao, Wat Chaloem Phra Kiat…there are so many hidden places to explore!

Chiang Mai feels like a lazy place…once you move away from the main roads. There are dozens of coffee shops and it’s the second easiest place in the world to find a vegan restaurant.

However, Chiang Mai is a city where new meets old. It is one of the culturally most dense cities in Thailand. There are over 300 temples in Chiang Mai alone, so you can hunt them all out upon reaching the city.

There are many different styles from the more simplistic to those covered in gold. You’ll find them around almost every corner…literally. In the hostel we will be staying in in Thailand, there’s a crossroad almost next to the entrance. Go ahead and you’ll spot a temple on your right. 1 down, 299 to go…

Northern Thailand has its own dishes that are staple foods of the region, give them a try! There are plenty, but why not try the most famous first, Khao Soi? It contains wheat-egg noodles in a spicy curry. If you check out some of the 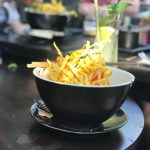 food stalls or more hidden restaurants, you can also try more authentic foods from around the country. Why not tuck into a Pad Thai after a long day of temple spotting?

Regardless of whether you’re on the January or September semester, Chiang Mai will host some iconic festivals. We checked out Chiang Mai Flower Festival when the 2019 group visited which introduced us to some of the traditional attire of the villages around the region. Of course, there were also floats covered in vibrant flowers, ranging from a gorilla to an AirAsia plane!

If you’re on the September semester, Chiang Mai hosts a lantern festival which looks gorgeous based on the photos online. Regardless of when you’re in the area, there will be a cool event to check out. Look online, ask your Location Managers or ask the people working at the hostel!

Last but not least, one of the main reasons you’re probably excited about coming to Thailand…elephants!

Elephant Nature Park is a short journey away. Global Grad have chosen the location due to their ethical standards- there is no riding and the elephants are well looked after, each having a mahout. We will almost certainly be going as a group sometime during the semester, but why not volunteer with them for a week? Molly and Louella from the 2019 group did so and it was an amazing experience: https://www.youtube.com/watch?v=BuiM3eK46nI&t=93s

Chiang Mai is the perfect place to start your time in South East Asia as it is a combination of many things- old and new, Western and tradition, mountain and city- which will help you ease into the life of living in another country. We’re super excited to see you out there! 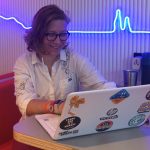 Jasmin Dawling is one of Global Grad’s January 2019 students and is completing a full-time Bachelor’s degree with the Open University in International Studies. While this is her first time formally blogging, she has had plenty of writing experience in the past, from novel writing since the age of six to working on the school newspaper. Apart from seeing the sights of South East Asia and working on her degree, Jasmin spends most of her time either procrastinating or writing down her novel ideas, be it on her travelling-inspired new ideas or the 7-part series she’s been toying with for almost ten years.

We use cookies to ensure that we give you the best experience on our website. Find out more.